I came across this post by Steve Stafford while researching a few things related to the Autodesk® Revit® Space element. The post described an issue where the architect wanted to divide a large room into smaller areas for very legitimate reasons. The architect used room separation lines to do this division. The problem was that the MEP engineer still needed a single space element for the very legitimate reason of MEP calculations.

Two competing legitimate reasons. What to do?

There is one other approach that works if Aaron's superior design options approach won't work. For example, there are already design options in those areas that make it difficult to use Aaron's approach.

Use an Overlaid Linked Model


The other possibility is to place the room separation lines in a separate model! The architect can then link in that separate model as an overlay and mark it as room bounding. The architect is then then place the sub-rooms in their original model. The image below is pointing to the room separation lines that are in the overlaid linked model. The room elements are in the host model. 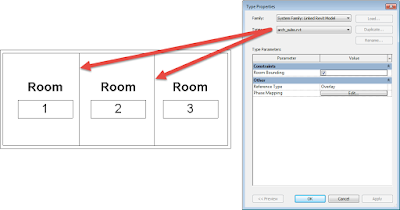 The MEP engineer, when they link in the architectural model, will only "see" one bound room when they place the space object. This is because the room separation lines in the architect's overlaid linked model are not loaded in the MEP model.

A few things to note with the linked room separation line model approach:

Aaron's approach would show only the room from the primary design option which does make such matching easier.

Ultimately, you have two choices. I would recommend Aaron's approach unless you foresee conflicting issues with design options. If Aaron's approach cannot work, at least you now have a good alternative.

Autodesk, the Autodesk logo, AutoCAD, Navisworks, and Revit are registered trademarks or trademarks of Autodesk, Inc., and/or its subsidiaries and/or affiliates in the USA and/or other countries.
Posted by R. Robert Bell at 10:16 PM